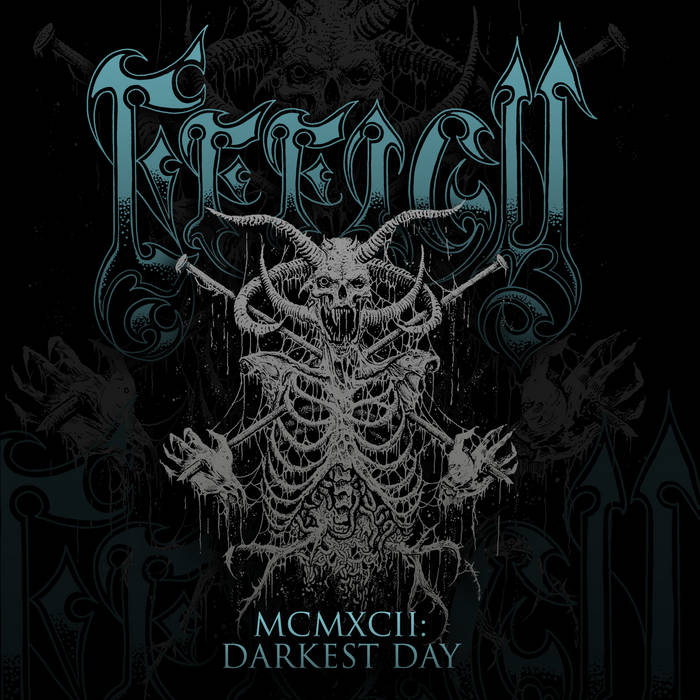 "Here we have a little bit of history. Death metal history and with this re-release a chance for fans to hear something that is truly ‘underground’. There’s no point comparing or contrasting this to the modern death metal scene because it doesn’t belong. Simply cast your mind back to the early 90s (if you were alive then) and enjoy this slice of raw and unrefined metal.
4 tracks, 4 chances to beaten to a blood pulp with raging riffs, drums that will crack skulls and vocals that are sharp enough to cut."
- Games, Brrraaains, and a Headbanging Life
www.gbhbl.com/demo-review-effigy-mcmxcii-darkest-day-redefining-darkness-records-raw-skull-recordz/

" [ Effigy's ] "Darkest Days" is a step back into time where Death Metal was raw and pure, bent on the destruction of your ears."
- Metal Temple
www.metal-temple.com/site/catalogues/entry/reviews/cd_3/e_2/effigy-mcmxcii.htm

“ ... we are given 4 songs of old school Death Metal drenched in “Leprosy”-era Death worship...
It’s got charm and would feel right at home with any obscure Death Metal release in the early 90’s.”
- VM-Underground Fanzine​
www.vm-underground.com/review/effigy-usa-mcmxcii-darkest-day-demo/

"What you will hear on MCMXCIII: Darkest Day, is four songs written at the time when death metal was in it's prime. The late 80's and early 90's were the genre defining years of the style and we hope you can travel back in time with these songs and feel like it's '92 all over again. "
- Thought Form Music

In 1992 Craig Netto and Dillard Logsdon (formerly of Sarcoma), first traded musical ideas at a mutual friends home in Kentucky and formed Effigy with some friends. Effigy completed four songs within a few months before getting the offer for their first and only show. Not long after the show two of the members joined Abominant and went on to release a number of albums with the band. While a few of the guys had some underground success in Abominant, Dillard Logsdon didn't pursue a band after Effigy's early demise.

In mid 2016 the core of the band re-connected and decided to ressurect Effigy with the intention of giving their original songs from 1992 a chance to be heard and, if all went well, continue to play together and maybe even write new material.

What you will hear on MCMXCIII: Darkest Day, is four songs written at the time when death metal was in it's prime. The late 80's and early 90's were the genre defining years of the style and we hope you can travel back in time with these songs and feel like it's '92 all over again.

This never heard before demo is the first of a collaborative series between Redefining Darkness Records (U.S.) & Raw Skull Recordz (Europe) called Forever Underground. The focus of the series is to re-release or in this case release never heard before material from pioneer days of Death Metal. After all the fun and success of our Burial - Relinquished Souls reissue that was recently released, we wanted to dive into more rare gems and give them their due! Expect a lot more incredible releases that will of course always remain Forever Underground!

Bandcamp Daily  your guide to the world of Bandcamp

Cannibal Corpse's George "Corpsegrinder" Fisher stops by for an interview